Get it Fast and Free. Free ground shipping on all orders.

A Joint Mission to Support the Families of Fallen Veterans

Since 2011 and beyond, we're proud to partner with Folds of Honor, a charitable organization that empowers the families of soldiers killed or wounded in battle with educational scholarships and support. A portion of the proceeds from select Bushnell products goes to support this great American cause. foldsofhonor.org

About Folds of Honor 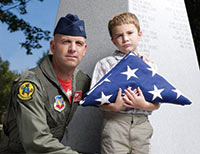 Founded by Major Dan Rooney in 2007, Folds of Honor provides educational scholarships to the spouses and children of service members killed or disabled during U.S. military service.

Major Rooney, a former F-16 pilot who served three tours in Iraq, founded Folds of Honor to ensure that families of fallen service members are never left behind on the field of battle.

More than 1.4 million dependents have been affected by the wars in Afghanistan and Iraq alone, with 85 percent of those not qualifying for federal educational assistance. Without the help of civilian organizations like Folds of Honor, many of these families would not receive aid

Since establishing a partnership in 2010, Bushnell has donated more than $650,000 to Folds of Honor. With support from organizations like Bushnell and individual donors across this great nation, Folds of Honor has awarded 5,400 scholarships to deserving families since its founding in 2006.

How You Can Help

Join the mission by becoming a Folds of Honor Wingman. Contribute as little as $25 to help provide a brighter future for the dependents of our nation's heroes.