How Does Night Vision Work? The Science Behind It

Night vision devices let you see in the dark. With quality night vision goggles and scopes you can see people, animals, and objects up to 1,000 yards away on a dark night. Night vision monocular cameras let you take photographs and videos of things you can't see in the dark with your naked eyes.

There are actually two similar technologies used in night vision equipment. Traditional night vision devices use optoelectronic image enhancement, which works by sensing small amounts of infrared light that are reflected off objects and then electrically amplifying that light into a characteristic glowing green image. A newer technology, digital image enhancement, captures available light on a digital image sensor and then digitally enhances the images in a full-color display.

Older night vision equipment uses optoelectronic image enhancement technology. This technology uses a series of optical lenses and a special electronic vacuum tube to capture and amplify the visible and infrared light that is reflected off nearby objects.

The first lens in the system, called the objective lens, captures the dim visible light reflected from the subject, along with some light from the low end of the infrared spectrum. This light, like all light, is comprised of small particles called photons.

These photons pass through the objective lens into an image-intensifier tube. This is a special electronic vacuum tube powered by small AA or N-cell batteries, which consists of two components.

The first part of the tube is called the photocathode. This component converts the incoming photons into electrons. As you might remember from science class, photons, neutrons, and electrons are all very small particles that comprise the components of an atom. Photons and neutrons combine to create the nucleus of the atom—electrons swirl around the nucleus and carry an electrical charge.

The newly-created electrons flow into the second part of the vacuum tube, called the microchannel plate (MCP). The MCP is a small glass disc with millions of tiny holes that multiplies the number of electrons, thus amplifying the electric signal several thousand times over.

As the electrons exit the end of the image-intensifier tube they hit a phosphor-coated screen. The phosphors on the screen light up when hit, creating a glowing green image that is considerably brighter than the dim light that originally entered the objective lens. You view the phosphor image through an ocular lens that lets you focus and, if necessary, magnify the image.

Why isn't this traditional night vision image in color? It has to do with the conversion of the photons into electrons, which strips the color information from the image and converts the original colored light into a black and white image. Green phosphors were selected because green is the easiest color to view for extended periods in the dark.

With digital night vision, the light entering the objective lens is converted into a digital signal via a complementary metal-oxide-semiconductor (CMOS) sensor, like the ones used in digital video cameras. The digital image is then enhanced electronically and magnified several times, then sent to an LCD display for viewing. The larger the CMOS sensor, the higher the resolution of the image you see. Many current digital night vision devices display and record full 1080p HD video.

Night vision technology is used in several types of devices, all designed to enhance viewing in dark or low-light environments.

Perhaps the most popular consumer user of night vision technology can be found in scopes. A scope is a telescopic sighting device used to view distant objects. Scopes can be either freestanding (handheld) or mounted onto certain types of firearms, such as rifles. Night vision scopes can be monocular (a single eyepiece) or binocular (two eyepieces for a stereoscopic image).

Night vision goggles are also popular. Think of these goggles as a binocular scope incorporated onto a head strap or helmet. Because goggles are worn instead of held, they free up your hands for other purposes. They're great for when you're moving around at night or in dark buildings.

Bushnell is one of the largest producers of night vision monoculars and goggles. Our Equinox Z2 line of digital night vision monoculars produces outstanding images, records video in full 1080P HD video, records audio, and has wide field of view in both night and daylight conditions. These devices include features such as Wi-Fi for sharing and full control of video recording, image capture, zoom, and many other controls remotely via the free Equinox Z2 app. They also include an IR illuminator with three power settings for increased viewing distances at night or in dimly lit interiors, as well as a slot for micro SD card storage of photos and videos.

When you need a night vision device, turn to Bushnell. We have been producing superior optics at affordable prices for more than 70 years. 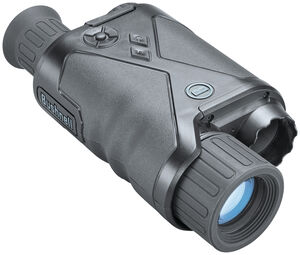 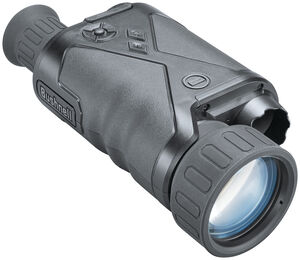 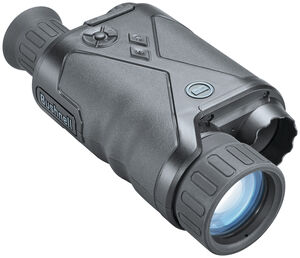