Hunting the Magic Hours - How Riflescopes Work in Low Light

You’ve probably heard hunters talk about, or witnessed, the “magic hours” right after sunup and right before sundown, when game animals are most active. Those are the times you want to be in place, on stand, in the blind, or in the field, ready for the hunt.

The problem is, those are periods of low, subdued light, when the sun is not fully up to brighten the scene in the morning, or the sun is dipping down, with the light fading, in the evening.

And that is why hunters in tune with hunting the magic hours use riflescopes that work well in low-light situations.

But to understand why and how some riflescopes work better in low-light conditions, it’s important to understand how they work or, in short, how they transfer light from the objective lens to the user’s eye.

First, the size of the objective lens, the large lens on the far end of the scope, determines the amount of light-gathering capability the scope has, explained Vic Ziliani, communications coordinator for Bushnell.

“For example a 3-9X50 riflescope is capable of gathering more light than a 3-9X40 because the objective lens is larger by 10mm,” Ziliani said. Simple math.

Second, light transmission “is simply defined as the optic’s ability to allow light to pass through the optical lenses,” he said. “As light hits any optical surface, the glass or plastic will naturally reflect some of that light away, preventing it from passing through the optic and ultimately getting to the user’s eye.” That’s where anti-reflective coatings come in. They reduce the amount of light that gets reflected, thus allowing more light to pass through to the user’s eye.

“Light Transmission can be improved by adding anti-reflective coatings to the optical train,” Ziliani said. “Bushnell UWB (Ultra Wideband) coating optimizes light transmission not only at one wavelength (color) of light, it optimizes a wide range of visible color wavelengths,” he said. “This means that during dusk, dawn, and twilight hours when mostly red and blue colors are available, you still have high light transmission.”

Next, we look at the exit pupil, on the eyepiece end of the scope. “The exit pupil is a simple calculation of the objective size, in mm, divided by the magnification,” Ziliani said. For example: A 3-9X40mm riflescope has an exit pupil of 13.3mm on low (3X) magnification and 4.4mm on high (9X) magnification. Well, maybe not as simple in the math department.

“It is important to note that the larger the exit pupil is the brighter the image will appear to the user,” he said. “It is also important to know that during darkness the human eye can dilate to roughly 7mm, so having an optic with an exit pupil equal to 7mm in size is ideal.”

One final point. Ziliani said there is a misconception that a riflescope with a larger main tube, say a 30mm tube rather than the smaller 1-inch tube, will gather more light. “This is simply not true,” he said.

So in summary, when looking for a low-light-performing riflescope, keep in mind the larger the objective lens the more light it will let in. Look for fully multi-coated lenses—an exit pupil of 7mm is ideal—and don’t worry about the diameter of the scope’s tube.

For more information and to see a complete line of riflescopes, visit bushnell.com. 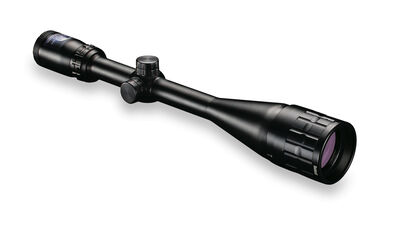