Don’t wait until fall. The dog days of summer are the smart time to put your trail cameras to work.

Going over trail-camera photos while looking forward to this fall’s deer season is far more than an idle pastime. Beyond calculating how much space you’ll need to clear on your wall and in your freezer, summertime trail camera surveys offer a wealth of information on what to expect once hunting seasons arrive.

More than just a method to help decide where to hang a stand, trail cameras have become year-round tools for land managers of every description. Too, in the past few years, technology and the marketplace have made trail cameras both more reliable and easier to use. The results have given deer hunting enthusiasts insights that have made a major difference in how they plan for opening day and the days and weeks that follow while the season’s in.

That’s a difference Cody Kuck (pronounced “cook”) has taken to heart. Heading into his fourteenth fall as owner and operator of Heartland Pride Outfitters, he and his team have long since come to rely on information gleaned from summertime trail-camera surveys. Much more than just a tool for mere “inventory,” photos revealing a long, hot summer’s antler growth give them both a starting place and a sense of urgency, letting them know what bucks are best targeted and when.

Get to Know Your Deer (Year-Round)

Based in Bertrand, Nebraska, the Heartland Pride Outfitters team puts clients on deer in the panhandle and south-central parts of the state, as well as in northwestern Kansas. Across acre after acre of the nation’s breadbasket, bucks on their properties grow and thrive.

“Improvements in the trail-camera game have greatly improved our world,” Kuck says. “When we started, we were shooting 10 to 25 rolls of 35mm film a night. Then we’d take it to the one-hour photo lab and wait to see what we had. Now, we’re able to wake up and have last night’s photos waiting for us on our phones. We can wake up, grab a cup of coffee, and start downloading. It’s Christmas morning every day around here, now.”

The haunts and habits of whitetails differ in the summer from the fall and winter, of course, but following the deer all year long has helped Kuck learn key details that have led to a lot of success.

“One thing I like about the summer inventory over the last two to three years is that we’ve been able to confirm we have a different inventory in September and October than we do in November and December,” he says. “We start putting out trail cameras for the summer around June 20, and that won’t stop until Christmastime. Being able to have 20 to 50 trail cameras out at any given time in one camp is a tremendous asset. We know going into the preseason and pre-rut phases what’s there. We know the bachelor groups will break up and some will disperse onto the neighbors’ property. But by following them all summer long, we’ve been able to learn which bucks run with which other bucks and, of those, which tend to spend the latter part of the season somewhere else. Of any group of four bucks, usually at least two will go off onto the neighbors’, so, in that case, we try to target earlier the bucks most likely to leave. If they’ve tended to chase does onto the neighbors’ in November, we know we need to hunt them specifically in September and October.”

Finding good deer photos means first finding the deer and, for Kuck in the summer, that means targeting water tanks. In his case, that often means tanks he and his operation set up intentionally to help the health of the herd in the first place.

“Some of our properties are all pasture ground with no crick or river bottom, so we’ve set up water tanks we’ll run through November to help the deer stay healthy. We want to know that, even when they’re rutting, they’re staying hydrated.”

From bachelor groups of bucks to healthy does and fawns, using trail cameras during the summer to monitor your whitetail herd will help you be better prepared for hunting seasons later in the year.

It Shouldn’t Be All a Blur

No matter what camera you use, the best photos are virtually always those taken of deer that have stopped, rather than passing by your camera at a jog. The get those kinds of shots, you need to figure out how to stop deer in front of the camera, or, better yet, installing a camera facing an area where deer naturally stop.

Where the deer can be expected to stop during the summer months and those early fall weeks before the temperatures start to cool is at a mineral lick. Natural or man-made, mineral licks provide grazing and browsing animals with sodium, calcium, iron, zinc, and phosphorus, all of which are critical components for muscle, bone, and antler growth. These sites are effective draws for deer in the summer when these growth processes are taking place.

Crops and waterways are two other places you should consider hanging cameras.

“Toward the end of summer and beginning of fall, when we notice the deer are following tighter patterns, we’ll start running cameras on travel corridors,” Kuck says. “At all times of year, deer feel secure next to crick bottoms or woods. Finding spots where that feature butts directly up to standing corn can lead to some especially productive spots to hang a camera.”

Along with determining where cameras are best placed, it’s important to take care how they should be hung.

“At this time of year, during the summer months especially, it’s important to make sure there aren’t standing weeds closely around the cameras, because they’ll trigger the cameras when they blow in the wind and you’ll have a huge download of waving weed pictures,” Kuck said. “Pull any big weeds or vines that are close to the front of the camera. Also, try to avoid hanging a camera on a tree that has low-hanging limbs, because the same thing will happen with those limbs.

“Next, it’s important to make sure you’re not pointing the cameras straight west or east, because the setting or rising sun that coincides with the deer activity interferes with the picture quality. Make sure your cameras are pointed as much north or south as each situation will allow,” said Kuck.

Summer food plots are excellent spots to monitor with trail cameras and are ideal venues on which to use the cameras’ time-lapse features. Time-lapse photos of a wide area can show numbers as and sizes of deer and also indicate when and how they’re using the field.

If you’ll be using your cameras on public land, or even on land commonly crossed by the public (and, yes, those annoying trespassers), it’s a good idea to put some thought toward hiding the cameras themselves. Extra security is also a good idea if your hunting grounds are in bear country. Strapped to a bare trunk in plain view of human eyes can help a camera take good photos, but it also invites vandalism and theft. If this is a concern, and especially if poachers and trespassers are one of the main things you’re wanting your trail cameras to monitor, experts say hanging the cameras 10 feet high or so can be just the ticket. It’s out of sight-line just about any human, and it can give a better area view than one fixed at shoulder height to a tree. Need more security? A number of companies produce lock boxes for trail cameras. Camlockbox, for instance, has an easy camera model reference page for its security boxes. Trailcampro.com makes several security cases that fit Bushnell trail cameras (and others), and it also offers its Universal Security Case Swivel Bracket that lends great flexibility with your camera mounting, especially when you’re putting one up high. Add in the Master Lock Python Cable with a generous six-foot length of cut-resistant braided steel cable and a pick-resistant lock, and you’ll make any thief think twice about working that hard to steal a camera.﻿

A Trail Camera (or Six) for Everyone

Trail camera features fall along a scale built to balance performance with price that sensibly match. On the get-the-job-done models that’ll run you a few Hamiltons, you get the pictures you need, but you’ll have to contend with regular battery changes and SD card retrieval. Others will run you several Franklins and will do almost everything except have a cup of coffee ready for you when you arrive at your stand.

Bushnell’s array of options ensure the right camera for every enthusiast appears along its line. From plotting strategies and planning habitat and hunting management of big game to providing key backup protection for your home and property, there’s a Bushnell trail camera waiting for you to hang it up.

Bushnell’s all-digital trail-camera options offer image resolutions ranging from 20 to 30 megapixels, guaranteeing you’ll be greeted with great views of the critters calling your land home. Across the line of Bushnell trail cameras, handy features run the gamut from an on-board color video display and the ability to record audio and video to compatibility with solar-powered inputs. There’s even a model, the Impulse Cellular Trail Camera, that houses a wireless cellular delivery system the enables you to retrieve photos without setting foot anywhere near the camera in question.

No matter what you choose, consider more than one. Game animals don’t stick to one place, and neither should your trail cameras. Same goes for using these handy items around the house. If budget’s a concern, consider several less expensive models (especially for home use, where gathering SD cards or swapping out batteries isn’t hard to do), then invest in one or two more feature-laden models for your more promising travel corridors and feeding areas where you’ll have the best chance to evaluate antler and body mass.—Kevin Tate 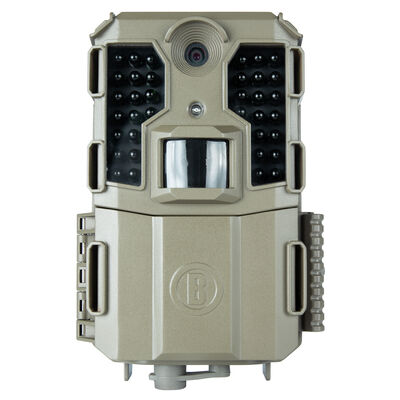 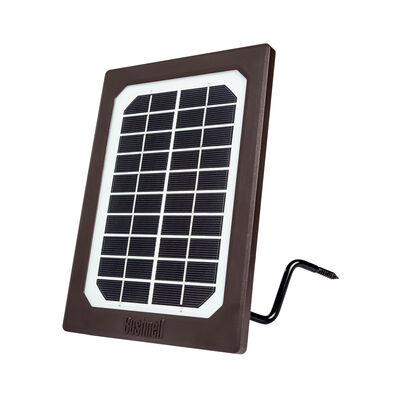